We started the day watching the sun rise over Oklahoma. The grasslands glowed gold in the morning sun. Cattle ranches were dotted across the state. I didn’t know that the soil was red; like PEI red. In fact it was red across Texas and into New Mexico.

Texas was flat as a pancake. If you lived there, and you were meeting a friend, you could see them leave their house five miles away. The temperature hit 21 C across I-40. I imagine this area would be unbearable in summer heat. There are no trees or shrubs to provide shade. I was hoping to see the oil derricks, but I guess they must be farther south. Instead it was all farm land, and it looked like they were growing stunted cotton.

We are staying in a little town in New Mexico called Tucumcari. I found this great Route 66 mural, see below. It’s a perfect little town where nothing much has changed since the sixties. We ate at a place called Del’s. Tom and I had the Raspberry Chipotle Chicken; yum, while Becky had a cheese quesadilla followed by some thing which I can’t spell or pronounce, drizzled in honey; double yum. This town was a lovely surprise, and I may come back on the trip home.

We spent the whole day on Route 66, and we’ll spend more than half of tomorrow. I have been across some of the eastern Arizona section; Oatman to Williams, which boasts gorgeous scenery and historic towns. It seems sad that the route isn’t used as much anymore as people travel by air to save time. Although it’s been slow, it has been less stressful, and it’s been a great way to see the country. 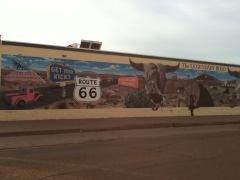 I was born in Birmingham, England and emigrated to Canada in 1988. Becky is my daughter who was injured in a car accident. We are working towards her independence.
View all posts by chebandbecky →
This entry was posted in Car, Life, Travel and tagged car, New Mexico, Oklahoma, Route 66, Texas, travel, US. Bookmark the permalink.

2 Responses to Get Your Kicks…