This what I need; a new challenge. Life with Becky has been nothing but challenges, so I will need something to fill the void as she moves away.

I did a web search on “hobbies”. Blogging came up several times. I’ve never thought of writing as a hobby, but there you go, I have one hobby. I already feel better. I continued looking through the lists which were compartmentalized into indoor/outdoor hobbies, collections/building hobbies, and so on. I know I’m not a collector, well, except for a few books here and there, but otherwise, I don’t have much interest in collecting things.

I’ve always been fascinated with models of architecture and have built several over the years, but that is not a challenge. I need something new. Gravestone rubbing? Do people really do that? Can you imagine someone coming up to you at a party and saying, “do you want to see my gravestone rubbing collection”? I think I’d head straight for the drinks counter.

I did spot something that I had thought about trying a few years ago; rock climbing. Yeah. I quite fancy that. Hanging by your fingernails, body stretched to its limit; oh yes, I could definitely do that. Slight problem; Southern Ontario is not exactly overflowing with mountains. It has some rolling hills and the Escarpment, a large rock formation running across the Niagara Peninsula and into Michigan and Wisconsin. I’m sure there are some rock climbing opportunities somewhere along the ridge, but not in February, March, or even April.

What’s so nice now, is that you can climb indoors. There are at least three indoor climbing venues within about thirty minutes of where I live, making the whole venture quite accessible. So, I’m going to look into it and I’ll get back to you. It could be very exciting, but in a good way, not a bad way like medical emergencies. Something exciting that doesn’t involve a hospital; I think I’m in heaven. If they sell chocolate there, it’s definite; heaven! 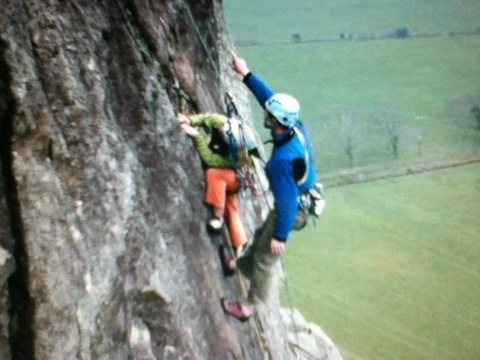 I was born in Birmingham, England and emigrated to Canada in 1988. Becky is my daughter who was injured in a car accident. We are working towards her independence.
View all posts by chebandbecky →
This entry was posted in blogging, Independence, Life, parenting and tagged architecture, blogging, Challenge, chocolate, emergencies, escarpment, gravestone rubbing, life, Mississauga, models, niagara, Ontario, rock climbing. Bookmark the permalink.

5 Responses to A New Challenge