Fundraising at the Moonshine

This is a collection of team shirts that have been worn for the Relay For Life over the years.  They served as a backdrop for the team fundraiser at the Moonshine Cafe in Oakville on Sunday May 6.  As you may know, I am part of a ten person team walking all night on June 1, to raise money for the Canadian Cancer Society. This national event is known as the Relay For Life.

Our team captain, also called Tom, wearing one of the team’s stylish outfits, served as MC for the evening and also sang (a capella) for his supper.  He included his version of “Valerie Wilkins”, which we all know and love.

The Moonshine was packed 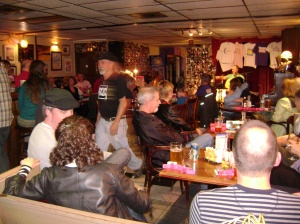 as the first act started.  Several musical acts had signed up to perform for free in order to entertain us for the night.

What a great night musically; we were treated to anything from Jazz to country, to celtic harp.

Jason, from Cape Breton, did an amazing version of “The Mary Ellen Carter”.

Tom, Sabby, and Bob performed “Bopping The Blues,” and had everybody hopping.  Tey also did some free-form jazz/blues.  The owner, John, closed the evening (much later) with a song that I can’t find the name for.  Sorry, John.  Anyway, whatever it’s called, we all sang along.

While all this was going on, we had a couple of drinks, held raffles and a 50/50 draw.

No-one at my table won anything…

I believe we raised close to $800 for the evening!!  Not a bad way to spend a Sunday night; having lots of fun with your friends, and raising money for a great cause.  Thanks to John and Jane at the Moonshine for hosting this annual event for the fifth time.  They always make us feel welcome.

I was born in Birmingham, England and emigrated to Canada in 1988. Becky is my daughter who was injured in a car accident. We are working towards her independence.
View all posts by chebandbecky →
This entry was posted in Family, Friends, Life, Music, Photos and tagged Bopping the Blues, celtic, friends, fundraiser, jazz, life, Mary Ellen Carter, Moonshine Cafe, music, Oakville, Relay For Life, team, walk. Bookmark the permalink.

3 Responses to Fundraising at the Moonshine