Last night was the Relay for Life in Oakville. The weather couldn’t have been worse, but a day of rain didn’t dampen our spirits. The event was moved indoors to a hockey arena.

Each team was given a small space and a makeshift track was set up around the edge. It was a little crowded, but we managed.

After a quick bite to eat, the ceremonies got under way. The survivors always start the walk, and even as I write this I get goosebumps. Everyone claps as survivors of all ages proudly, and sometimes emotionally, walk the track while the rest of us us cheer them on. At the end, the rest of the walkers start the walk. Space was at a premium as hundreds of people squeezed onto a 5 or 6 foot wide track. We immediately hit a bump as we discovered that only one side had a ramp and the other side had a step. Organizers quickly resolved the problem and added another ramp. Becky had to have some candy floss to console herself while she waited. Within ten minutes, we were all walking.

A couple of hours into the walk, the rain stopped. Some of us walked outside to get some fresh air. The site, on the banks of Lake Ontario, is quite lovely. Appleby College allows us to destroy their campus once a year. Many of the students volunteer for the evening.

One of the buildings onsite is a small chapel.

Inside was a soprano singing an aria from Madama Butterfly. 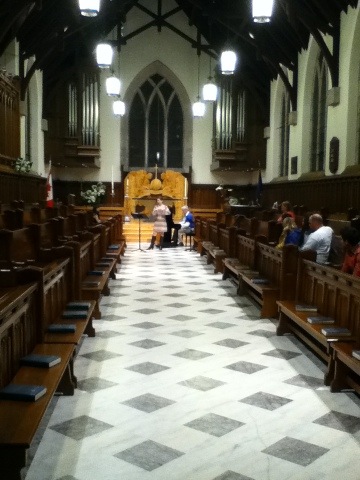 Beautiful. The rain started again and we headed back to the arena.

Around 10 pm, the luminary ceremony began. Five people lit their luminaries and explained who their luminary was for. One gentleman was lighting a candle for his wife, and he managed to choke out her name before he broke down. We all had a small piece of our hearts break for him, and for ourselves as we remembered who we had lost.

One of the teams came up with a great idea; let’s occupy something worthwhile,

I was born in Birmingham, England and emigrated to Canada in 1988. Becky is my daughter who was injured in a car accident. We are working towards her independence.
View all posts by chebandbecky →
This entry was posted in Disability, Family, Friends, Grief, Life, wheelchair and tagged Cancer, disability, family, friends, Hope, Oakville, occupy, Relay For Life, survivors, team, walk. Bookmark the permalink.