Posted on October 8, 2012 by chebandbecky

Went for a walk along the canal, on Sunday, with my brother and his family. Birmingham has more miles of canal than Venice. You can walk to most parts of the city using the canals, so they become a natural choice for an afternoon stroll. 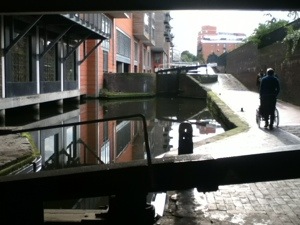 Over the years, the city has cleaned these remnants of the Industrial Revolution and turned them into a tourist attraction. There is a famous story of Bill Clinton marching off, during a visit to Birmingham, to have a pint in a canal side pub. The same one we stopped in, actually.

It’s a great way to spend a couple of hours, step back in time, and re-trace the steps of thousands of horses that used to pull the barges.

There are new buildings as well. We discovered this gem along the way. you have to cross the canal in order to see the mural. Well worth the trip.

The canals are still used by barges today, only they are hauling tourists instead of coal. Wherever there is an incline, there is a set of locks that the boats navigate their way up or down. 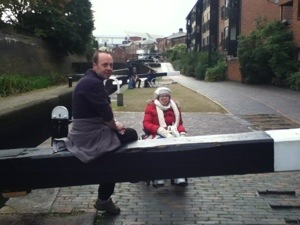 It can be back breaking work when you have a series of ten or more locks; not uncommon in the Midlands. The pubs become a necessity as boaters stop by to quench their thirst. There’s something pretty cool about a place that you can float to.

It was a bit of a challenge pushing Becky up the hills, over the cobbles, and a variety of other obstacles, but so worth the view. I had a lot of help, and ended up not pushing at all, which was a lovely treat. After a short beverage break, we took an easier route back to the car and went through the centre of town.

The new library is almost complete and is a sharp contrast to the historical buildings in nearby Chamberlain Square. Birmingham is a city that has reinvented itself after a steep decline in the seventies and eighties. I love how it has turned out and am proud to call it my home town.

I was born in Birmingham, England and emigrated to Canada in 1988. Becky is my daughter who was injured in a car accident. We are working towards her independence.
View all posts by chebandbecky →
This entry was posted in Birmingham, Disability, Family, Home, Life, Photos, Travel, wheelchair and tagged Birmingham, Canals, disability, family, history, Home, life, Parenting, photos, travel, wheelchair. Bookmark the permalink.