If I remember correctly, only one person got this Technical Challenge right on the GBBO. This is Paul Hollywood’s Focaccia. It looks simple enough but the dough was tricky to work with. Take 500g bread flour, add 2 sachets of instant yeast and salt. Add 2 tbsp olive oil and 300ml cool water. Make a dough. Slowly add another 100ml water to the dough. This water made the dough, wet and lumpy. It really looked like a disaster. Anyway, we kept stretching and folding with a bit of oil on our hands until it looked a bit better. Then we kneaded as normal. Hey, presto! We had a smooth, light dough. We covered it and let it rise for about 2 hours.

We cut it in half and put one half in a bag in the freezer. The other half was pressed into a 30cm x 20cm baking tin, which we don’t have here, so we used the next size up.

The recipe said to leave it to rise uncovered. I don’t think that was a great idea as it formed a skin and didn’t rise very much in almost 2 hours. Sprinkle with olive oil and sea salt. Bake at 220C/425F for 25 minutes. I checked at 20 minutes and it was well done. It didn’t look that good but we cut it open anyway.

Surprisingly, it looked pretty good inside. We grabbed some balsamic vinegar, olive oil and some cheese and dug in. It tasted really delicious! It was light and spongy. 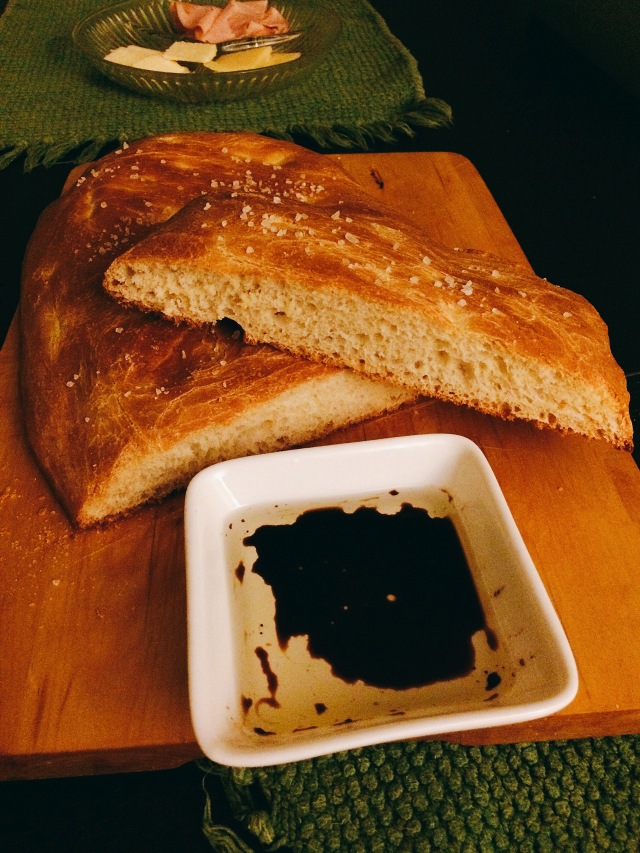 I think we would make this again because we really like these kinds of meals. It was way better than store bought focaccia even though we thought it hadn’t risen very much. I would maybe make it into a smaller shape and cover it for at least half of the second rise.

I was born in Birmingham, England and emigrated to Canada in 1988. Becky is my daughter who was injured in a car accident. We are working towards her independence.
View all posts by chebandbecky →
This entry was posted in Baking, Food, Photography and tagged Bake Off, Baking, focaccia, food, Paul Hollywood, photography. Bookmark the permalink.