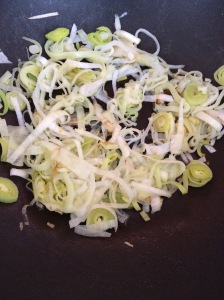 This is another Gordon Ramsay recipe from “Home Cooking”. You parboil a pound of potatoes. Cool and grate. Meanwhile shred a leek and sauté until soft. Add the potato, 2 ounces grated Gruyere, seasoning and mix. 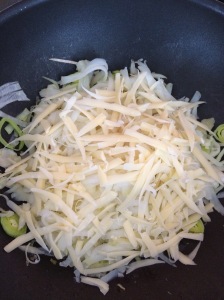 Fry in butter and oil for 10 minutes, pushing the mixture into a flat pancake shape. 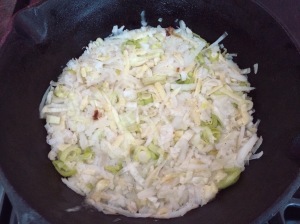 Put a plate on top and flip everything over. Add some more oil to the pan and slide the Rosti back in to cook the other side. Cook for another 10 minutes.  Serve with fried egg.

As usual, we changed the recipe a bit. I was distracted by some problem and the potatoes ended up fully cooked. I didn’t have time for them to cool so I threw them in cold water. The photo in the book shows the Rosti in a cast iron pan so that’s what I used. Not a good idea. A non-stick frying pan would probably work better or don’t flip the thing over but pop it under the grill/broiler.

It was quite a bit of work, used a lot of pans, and didn’t look the most appetizing; however, it passed the taste test. Delish. I think we would make smaller Rosti next time and prepare the potatoes the day before. 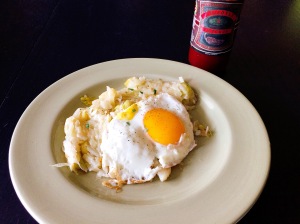 We had ours with chipotle ketchup. Yum! This was a good supper for a cold night. 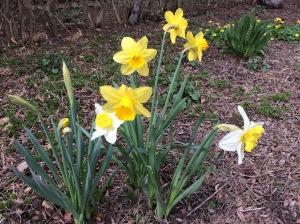 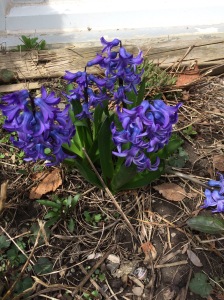 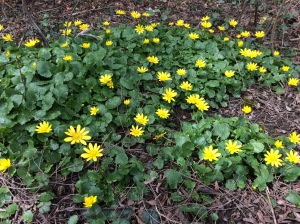 The days are still cool, but Spring has finally arrived…

I was born in Birmingham, England and emigrated to Canada in 1988. Becky is my daughter who was injured in a car accident. We are working towards her independence.
View all posts by chebandbecky →
This entry was posted in cooking, Food, Photography and tagged cooking, food, photography, rosti, Spring, vegetarian. Bookmark the permalink.

3 Responses to Leek and Gruyere Rosti